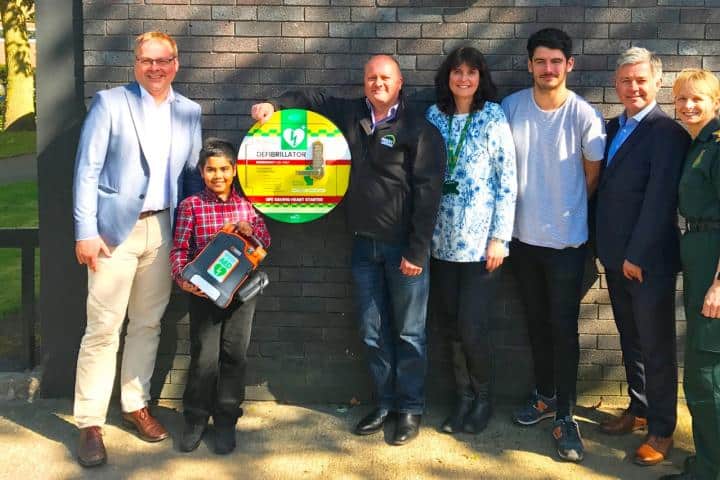 Life-saving heart equipment has been installed at Wilmslow Library – thanks to a talented young writer who got the surprise backing of Manchester United star Wayne Rooney.

Wilmslow Library and Wilmslow Football Academy’s (WFA) Erik Garner set up a competition last year for young writers to pen a simple story with a football theme to raise money for a defibrillator.

JJ’s story was chosen out of more than 70 entries submitted by local school children. He was awarded his prize by surprise guest England and Manchester United captain Wayne Rooney at a ceremony in Wilmslow Library last December.

JJ’s story was then turned into a bound book with illustrations and copies went on sale, including several autographed by United’s record goalscorer Rooney, with proceeds going to North West Ambulance Service (NWAS) charity CardiacSmart, to raise funds for a defibrillator.

The money raised has enabled an outside-wall-mounted device, which with its cabinet cost around £1,500, to be installed on the library building – which has now been unveiled at a ceremony led by JJ.

NWAS CardiacSmart team fundraiser Kevin Hookham said: “We would like to express our sincere thanks to Wilmslow Library, the WFA and Sarafina staff, who organised the fundraising.

“Public-access defibrillators save lives. When a cardiac arrest occurs, the first three minutes are absolutely critical in terms of outcome for the patient. It isn’t necessary to have any prior training to use a defibrillator – the machines will talk to those attending the cardiac arrest sufferer. What is most important is early resuscitation intervention until an ambulance arrives.

“Ultimately, we would like to see public access defibrillators on every street corner – but we’re probably many years away from achieving this. That’s why strategically-placed defibrillators, such as on community hub centres, are so important.”

Councillor Paul Bates, Cheshire East Council cabinet member for communities and health, said: “JJ and everyone involved should be very proud of what they have achieved through their shared passion for storytelling, football and helping to save lives.

“I would also like to thank Wayne Rooney for supporting this important community project which help prevent unnecessary deaths and provide greater peace of mind.

“To have one of the world’s most famous footballers support our library and the work that we do with children to encourage literacy and reading – and help give a boost to this vital fundraising drive – was simply fantastic. I am also grateful to Erik Garner for his hard work in arranging this successful scheme.”

Cardiac Smart Paramedics Sara Harris and Mike Pain will offer free defibrillator training sessions at 11am on Saturday June 10th and Saturday June 24th at Wilmslow Library. Adults, children and families are all welcome to attend. Please ring the library on 01625 374060 or call in and sign up for a session.

Copies of ‘John’s Magic Gloves’ are still on sale for £5 each, while stocks last, at Wilmslow, Handforth and Alderley Edge libraries, WFA, and Gorsey Bank Primary School. All proceeds will be given to CardiacSmart.